FLEX. DEMAND ANSWERS. Releasing the INVISIBLE TENDRILS of the... 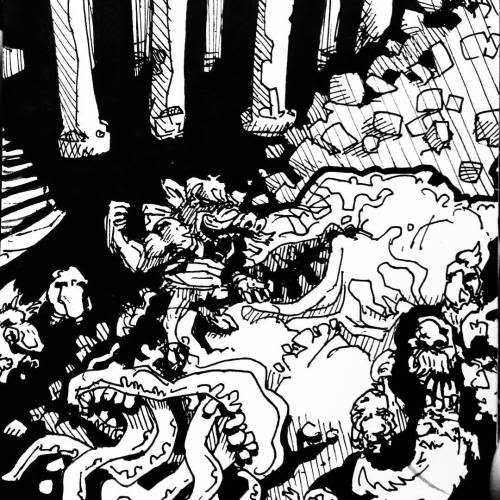 FLEX. DEMAND ANSWERS.
Releasing the INVISIBLE TENDRILS of the SCREAMING SKULL, you ride down the crumbling landslide on the back of your defeated foe’s corpse. The NUGS gather around you in awe. You flex mightily. They seem impressed.

“Behold!” You bellow, “I have slain this mighty trespasser to your lands! In return, as tribute, I demand information on Hallibuffer Oonx!”

“Pah!” The NUG KING spits on the ground before him. “You led this Overcity watch-beast straight to us; destroyed our home!” The NUGS around him begin to mumble, and he pauses, thoughtfully.
“As for Oonx, though… I’ll leave you to him. You’ll find him in the city-above-the-city, though I know of no map to lead you there. Now, leave us! Nark log arg og! Ag loog!”

With that, NUGS come swarming out of the shadows, hacking away at the CTHULHUDOG’S CORPSE and hauling off chunks of granite-tough meat. Items glint from behind its rib-bones.

The SKULL stops screaming and begins to untie itself from the ceiling.

LEVEL UP! Ontok has gained enough experience for the next level! Go to http://goo.gl/forms/5FAUFQ8sdj to choose Stats, Skills, and Perks!
Also, 3 top Doodle Dungeoneers have won Steam games, and will be contacted presently!