LEARN ABOUT GREJORGIO. LOOT HOVEL. “Unwanted by the... 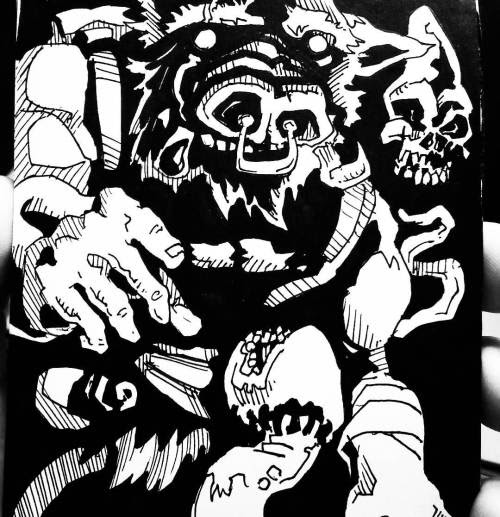 LEARN ABOUT GREJORGIO. LOOT HOVEL.
“Unwanted by the authorities, eh?” you mutter gruffly to GREJORGIO, THE INVISIBLY-TENDRILLED SKULL. “I’ve been on that side of things, to be sure.” You squint your eyes at your new companion’s wispy, ethereal form. “You don’t much appear a force to be reckoned with, though…”

With this, he reproduces the MYSTERIOUS THROBBING ORB that seemed to draw the CTHULHUDOG, now lying dead in the murk of the sewers.
“I…. knowwww much. Curiossss ssssuch as thissss…. are plain to mmmme.”

As GREJORGIO holds the ORB, it begins to dissolve. As you watch, it glows, fades, and is gone. All that remains is a slight residue on the odd creature’s tendrils and an acrid, burning scent.
“Onnnce.” His voice seems to echo through the skull, and yours, and Time, and Space. “I mmmay bring to bear the fullllll power of objectssss ssssuch as thisssszzz. But onnnnly once.” Your fingers itch violently.

The militant noises outside seem to draw nearer. It sounds like they are beginning to search the area, door-to-door.

You decide to take what supplies you can from this place while there’s still time, and reach for a nearby NON-GLOWING MUSHROOM. It turns to your hand, and, with a puff of spores, begins to shriek.