>>SQUEEZE THROUGH WOUND: You grunt as you contort your... 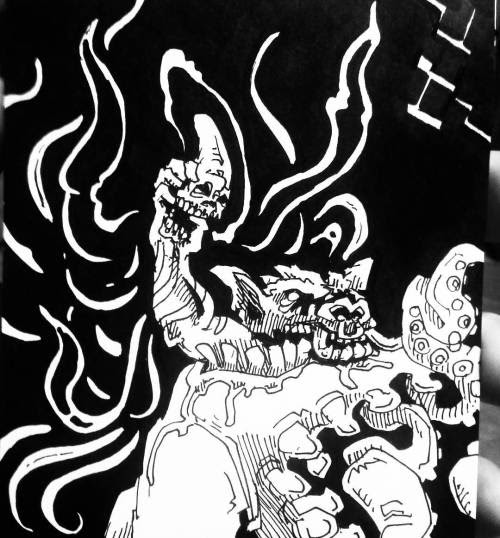 >>SQUEEZE THROUGH WOUND:
You grunt as you contort your meaty frame in an attempt to push it through the small wound you’ve cut into the CTHULHUDOG’s torso.

As you strain against the terrifying creature’s still-active stomach lining, you notice a slippery, jelly-like texture covering some parts of the opening. As you catch it shimmering lightly in the dim luminescence of the sewers around you, you realize that this must be part of the makeup of the SCREAMING SKULL you still hold in one hand.

You manage to squeeze your head and one arm through the opening before becoming hopelessly stuck. As you hold the SCREAMING SKULL above your head, you see its invisible tendrils unfurl, spreading upwards into the dank chamber.

The CTHULHUDOG, meanwhile, seems to be trying to scramble up the steep rockfall it caused on its way down. Ambient light shines down from the city above as the stony beast charges up, then slides down, again and again.

The SKULL resumes its screaming.