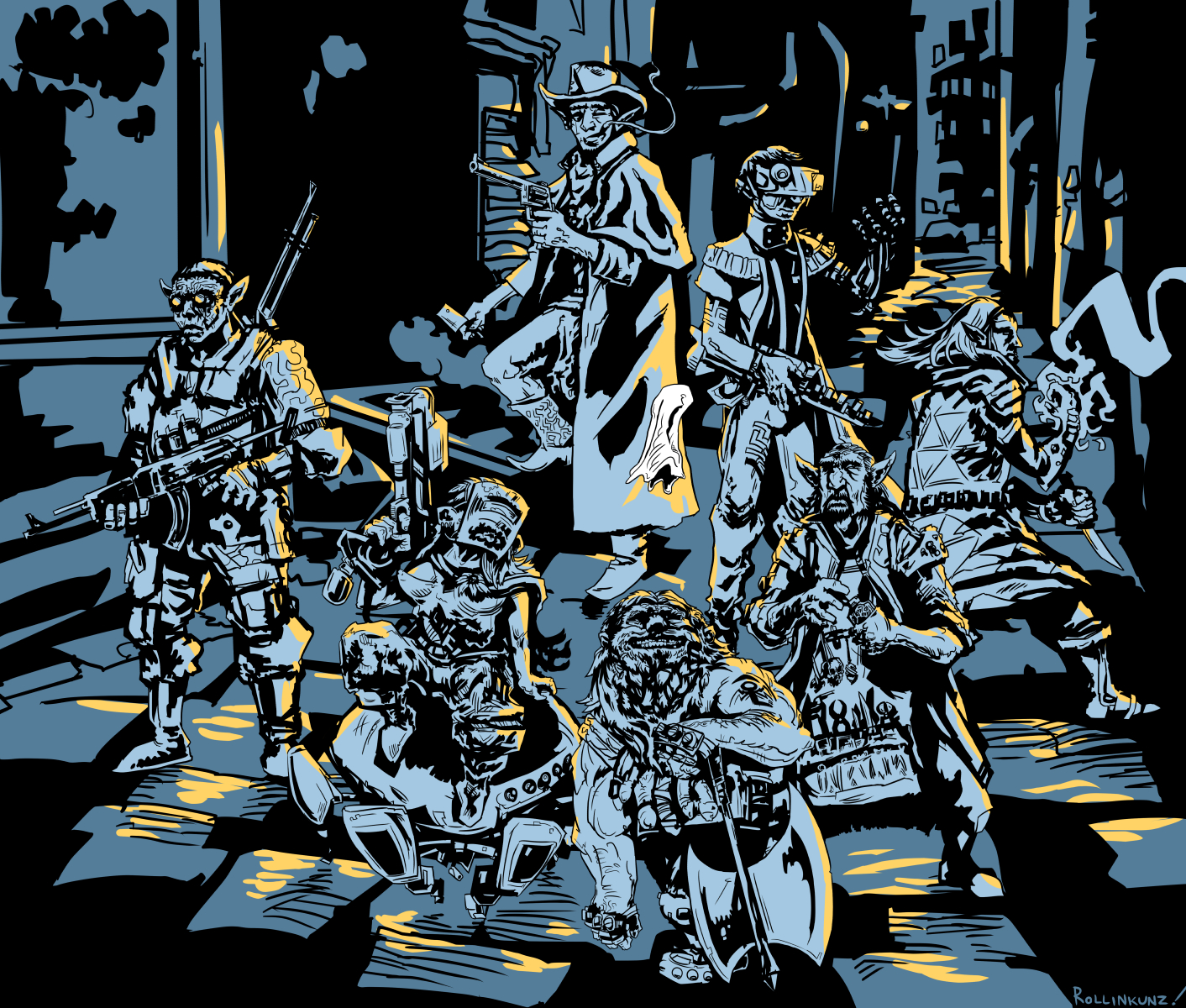 Just finished up a series of 7 character commissions for a game of Shadowrun. Detail images and the character descriptions I was provided with below! 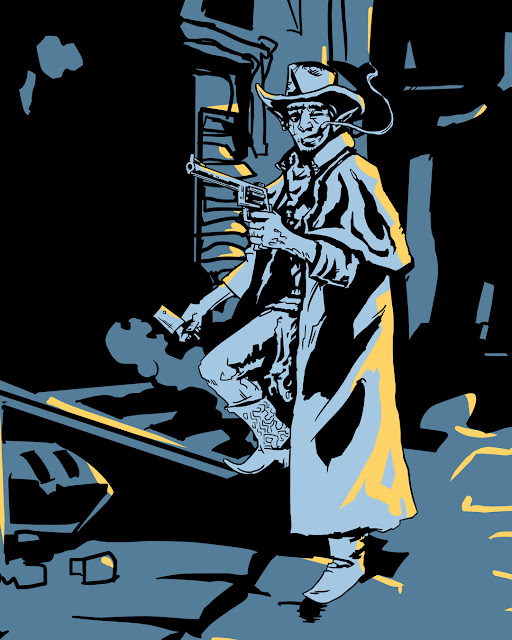 Guyana looks like the elf version of John Wayne, smoking a cigar and wearing the Fabled Hat of Walker Texas Ranger. The hat is super important and his most cherished possession, he seriously will derail the entire party on a side quest to find his fucking hat. Currently he is wearing brown armored duster, cowboy boots, and pink rubber pants- of which the butt has been ripped out, leaving a flap that currently just kind of hangs over his junk like a makeshift loincloth. His ensemble is completed with several curios, including a tiny meat cleaver dubbed “Tiny Cleaver”. Since Buffalo is a healing totem with deep aspects of loyalty, many of his powers are focused on healing the wounded. He still manifests the force of charging Buffalo in the form of awesome buffalo hadoukens, cool wrestling moves, and other buffalo related hand to hand feats. Guyana’s hatred of gangs has drawn him into conflict with Sidecar on many occasions. 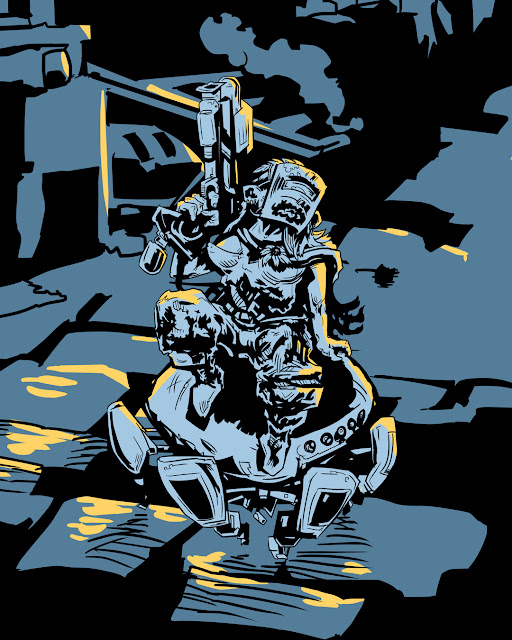 Crindi is a stocky female dwarf with shoulder length pink hair and a scruffy beard. She often wears a welding mask with a mouth hole cut out of it or a leather gimp mask that has the addition of a red mohawk. The mohawk used to belong to an Orc ganger that was killed and scalped. She is clothed in an armored corset to help hold her ample bust in place and is draped in a leathery cloak made of suspiciously tattooed skin. She also sports a squirty flower similar to circus clowns, but hers is filled with corn mash moonshine. Crindi is plagued by occasional chronic face herpes due to questionable lifestyle choices. She is always accompanied by her two drones: DroneyDrone, a small, basic flying quadcopter drone, and SpideyDrone, a four-legged walking drone model with an additional clamp arm, blowtorch arm, and integrated submachine gun.Her carried weapons of choice include a hidden shock baton nestled between her breasts and a small flamethrower that has similar profile to a bullpup assault rifle with an attached fuel tank. 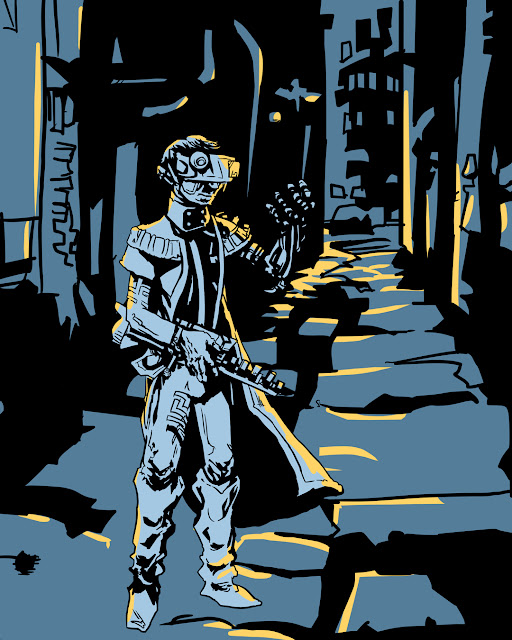 Leon is a socially awkward techie, tall and lanky, somewhat pale, dark haired, and of Hispanic descent. His insecurities run deep enough to have body mods done to make his ears pointier and he attempts to pass for an elf at times. He is often seen wearing an armored trench coat and a pair of goggles and has plenty of pouches and tools of his trade. His cyberdeck is a recently acquired high-end user model, but he has several other customized devices created through his tinkering. This includes an always-in-reach environmental scanner that has the ability to detect the composition of substances, trace electronics, and other useful things.His weapon is a custom built, bolt action weapon called the Mini MAC. It is a handheld mass driver that can be used to fire specialized ammo tipped with different effects, like small grenade rounds. As a backup, his glove handily conceals an integrated pistol-caliber holdout weapon with a single shot of anesthetic gas in case he’s cornered. 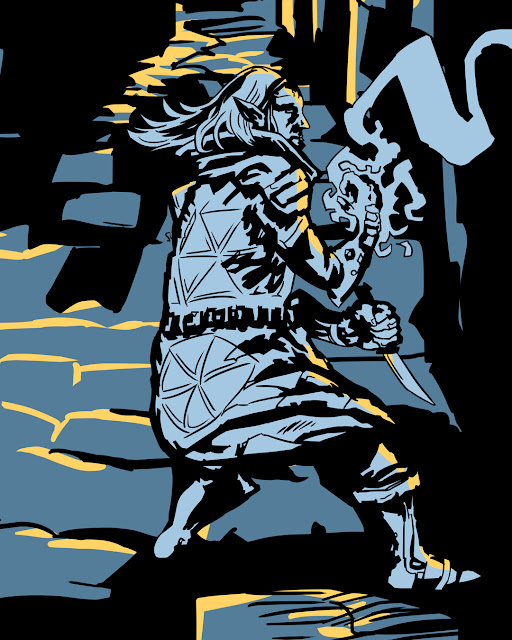 Ry looks sort of like a young Elven Aryan wet dream with blue eyes, pale skin, and blonde long hair. He wears a stylish blue triangle-patterned duster with electric blue trim and has static electricity problems at times due to his affinity and ability to control electricity. He is also skinny and socially anxious, but very comfortable with electronic devices. His go-to weapons are a combat knife that he charges with a lethal shock and a Defiance Supershock taser gun with a pistol grip, but most of the time he relies upon his Palpatine-like ability to project electric bolts from his fingertips. 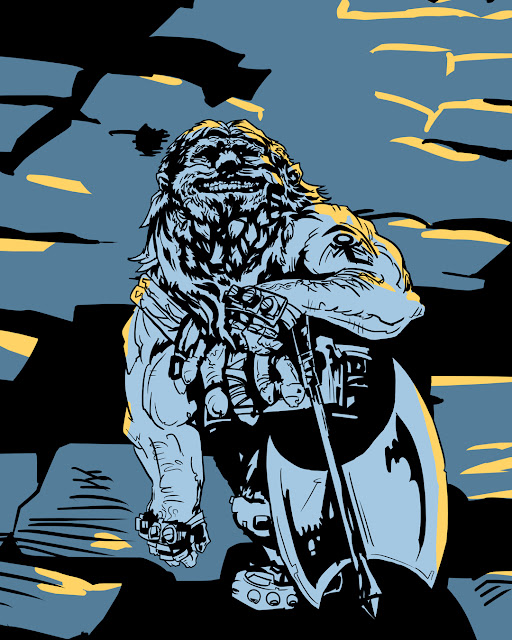 Sidecar is a tough looking scarred dwarf ex-go ganger with tied back red hair, and a huge braided red beard and moustache. His beard and moustache form a triad of thick locks held by huge gold rings. His oversized hands are calloused and he wears rings on most of his fingers. He wears a dirty brown duster with armor plating, and has kill trophies in the form of a huge necklace of severed dicks. The centerpiece of the dick necklace is the Mummified Dick of Amon Ra. He is zealous in the pursuit of his targets, and his preferred weapons are a huge battle axe designed for use by a troll, and a pair of blast knuckles to add bite to his punches.  Although he is a fearsome hand to hand combatant, Sidecar’s strengths also lie in the arts of intimidation, manipulation, and negotiation. His reputation of relentlessness carried far in the streets before his gang was destroyed in a series of conflicts. He still continues to do small-time deals and hits along with his obese, unapologetically homosexual, big black lover that goes by the name of Driver. 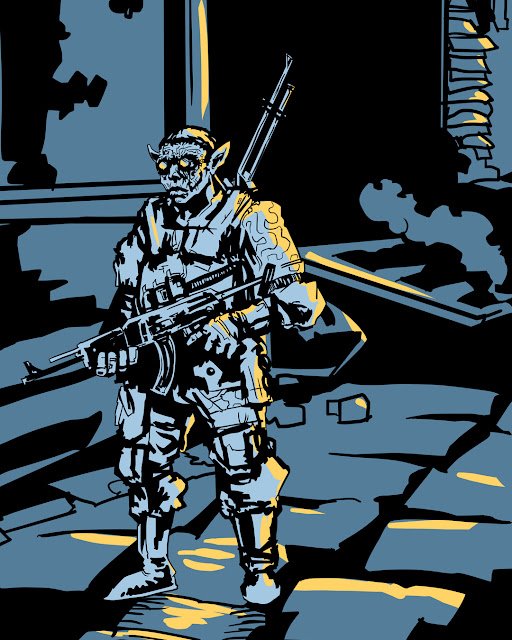 Thurdan, Elven Street Samurai that Trains as a Marksman

Thurdan is an older elf in his sixties. He has grey hair and several facial scars, and cybereye modifications. Thurdan is a former contract killer for the elven nations, and carries multiple trophy weapons in his pack with him whenever possible. His go-to weapons are the gold-plated, box-magazine AK97 assault rifle and a large silenced sniper rifle named Cherlene with an advanced scope. Due to the dangerous nature of his assignments, Thurdan is currently wearing a mishmash of clothing- a retrofitted armor vest covers the remaining scraps of his custom camo business suit. 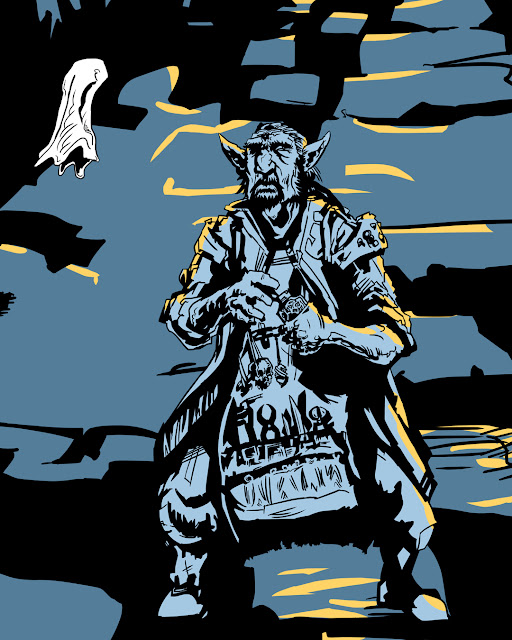 Yuri, Elven Mage that Commands Mental PowersYuri is an intense Elven mage from Russia with deep ties to the Vory (Russian Mafia). He has a grey ponytail covering up a gem on the back of his neck that he uses as a power focus. He wears a goatee. His armored duster covers multitudes of fetishes and trinkets to compliment his craft. When the situation requires an in depth interrogation, he will wear his ‘torture coat’: a sturdy apron with many implements of pain such as scalpels, pliers, knives, and even a small blowtorch kept in easy reach. Upon his head he wears a novelty drink hat designed to carry a container of tasty beverages, and a flexible straw protrudes down into his mouth so that he can fuel his functional, yet severe, case of alcoholism at will. One of Yuri’s most coveted possessions is his Enchanted Flask of Unending Vodka, which he keeps on his person at all times. In recent days, Yuri has modified the use of his powers to include ‘napkin based damage’. By focusing his telekinetic abilities, he often hurls vodka-covered napkins at his foes and attempts to set them ablaze or creates makeshift molotov cocktails.