>>STINK AT NUG KING: You respectfully introduce yourself... 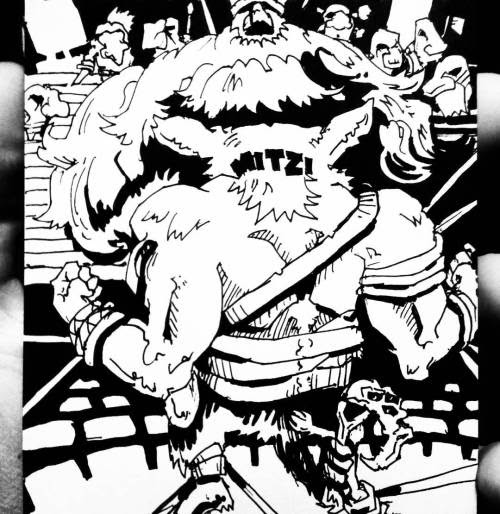 >>STINK AT NUG KING:
You respectfully introduce yourself to the NUG KING the only way you know how: a blast of murky odor.

Surprisingly, the NUG KING speaks:
“There is no need for that; I am well-versed in your tongue, Overworlder.”
He regards you coolly. “So. This is the interloper that has brought an artifact of the nefarious Overcity into our midst. Narg lag lok!”

With that, the multitude of NUG GUARDS filling the chamber throw themselves atop you. You toss several aside as though they were paper, and manage to slash one with your HIDE-KNIFE, but with force of sheer numbers, they manage to wrap rough tendon-ropes tightly around your arms and legs. Your PREHENSILE TAIL, still holding the ODD SKULL FETISH, is too quick, and eludes capture.

“None of you mentioned our trespasser was so… hirsute,” the NUG KING’s nasal voice chimes. He takes the MYSTERIOUS THROBBING ORB from his fellow tribesman. “Many fine trophies, his hide would make. And there is also the matter of this… strange totem. It pulses, as though with life.”
He turns back to you, his full regal glare boring into you.
“What have you brought us?!”

The dull booms from above grow louder.

Suggest commands and/or vote on others’ to gain Ontok XP! When Ontok levels up, a random top commentator wins a Steam game of some sort!