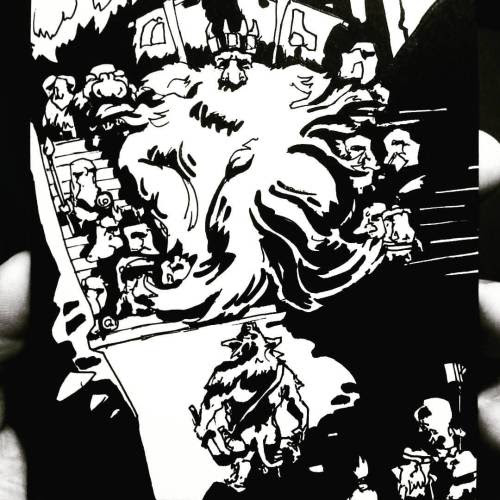 >>ACQUIRE FETISH. SNEAK NORTH.
You respectfully accept the ODD NUG SKULL-FETISH from the NUG SHAMAN-CHEF. Even though you pick it up with your PREHENSILE TAIL, your fingers start to itch a bit.

Next, you sneak North, through curtains of hanging fur, into a much larger chamber.

A hush falls over the HALL OF THE NUG-KING as you enter. You suppose you weren’t sneaky enough- or perhaps it was the crowd of NUG WARRIORS entering behind you.

Here, in this comparatively vast sewer chamber, the NUG KING sits atop his throne of furs. Hair of every sort is braided and lashed together, completely covering the (you assume) diminutive liege’s body, as well as his throne, and most of the stairs leading to it. Borrowed hair seems to be some sort of status symbol to nugkind.

The NUG LEADER you met before is holding the MYSTERIOUS THROBBING ORB you pulled from your arm earlier. It’s throbbing up a storm, at the moment.

Heavy booms echo from far above.